Daniel started wearing his copy-guy hat in 1999. He didn’t even know what vellum was at the time, but more than a decade later he seems to have a better idea. He tackles 1,000 page spec books and 4 page newsletters with equal enthusiasm, treating every job with the respect it deserves. He listens to podcasts during his commute to work, in order to catch up on such riveting shows as Wait Wait Don’t Tell Me and Comedy Death Ray. The fuzzy objects next to him in the picture above are his dogs Comet and Capri, both rescue dogs and general buckets of love. In his free time he plays guitar, piano and sings songs with his lovely wife Jesica, and the doggers often sing along as well. 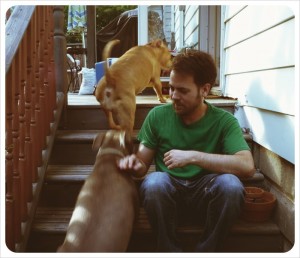